We spend almost a third of our lives sleeping – or at least we should be.

A lot goes on behind closed eyes – our bodies are actually quite busy when we’re not awake.

It is recommended by the National Sleep Foundation that adults get between 7-9 hours of quality sleep a night, but a recent survey found that a third of adult Canadians aren’t meeting these recommendations, and that 43% of men and 55% of women reported trouble going to sleep or staying asleep. The report also notes that serious health issues can arise from inadequate sleep, stating “insufficient sleep (short duration and poor quality) is associated with a range of adverse health outcomes, including obesity, type 2 diabetes, cardiovascular disease, injuries, all-cause mortality, depression, irritability, and reduced well-being.”

So, what’s getting between us and restorative sleep? Habits like screen exposure close to bedtime, alcohol consumption, excessive caffeine intake and unsupportive sleep environments can impact our sleep patterns. While steps can be taken to change these factors, others can’t be changed or controlled so easily.

Stress, worry, anxiety and “busy minds” are often responsible for keeping us awake, or wake us up throughout the night, and unlike an iPad – these cannot simply be “switched off”. In today’s world, stress levels and anxiety are higher than ever and can seriously impact healthy sleep.

Prescription medications are sometimes used for sleep disorders but can come with side effects that carry over into the following day, or have addictive qualities for some people. Fortunately, there are natural solutions.

Various parts of plants have been used for thousands of years across cultures for their calming, sedative effects. Today, these herbal preparations are just as effective in safely helping to quell anxiety and encourage the body to reach a state of relaxation for healthier, restorative sleep. Some excellent herbs for sleep include:

An herb native to Asia and Europe with a root portion that has been used in traditional medicine for at least 2,000 years to relieve nervousness and for its sedative effects as a sleep aid. Hippocrates described its therapeutic uses, and throughout World War II it was used as a calmative agent.

Ample research has found the efficacy of certain compounds in valerian root in helping with insomnia, reducing restlessness and remedying sleeping disorders associated with anxiety.

From the time this beautiful tropical plant was introduced to Europe from the Americas in the 16th century it was recognized for its remarkable tranquilizing and sedative properties.

Recent studies indicate passion flower to be as effective as prescription drugs (i.e. benzodiazepines) in eliminating the symptoms of anxiety-related disorders as well as effectively reducing the time it takes to fall asleep and improve the quality of sleep with less waking up throughout the night.

This low-growing, daisy-like annual native to Europe and Asia has been known to medicine from classical antiquity. Its name is derived from the Greek word that means “earth apple” on account of the scent of its fresh blossoms. Chamomile contains a flavonoid called apigenin that has been found to have sedative effects through its action of binding to receptors in the brain.

The therapeutic use of female flowers from the hop plant date back centuries to Europe where they were used in preparations to relieve tension and as a sedative. Hops have also been found to be particularly effective for sleep when taken with valerian.

Found in the Western United States and Mexico, the flowering tops of California poppies were traditionally used by Native Americans for their analgesic (pain relieving) and mild sedative effects to encourage the onset of sleep

Also called “lion’s tail”, motherwort’s use dates to ancient Greece where it was used to help reduce anxiety during childbirth. 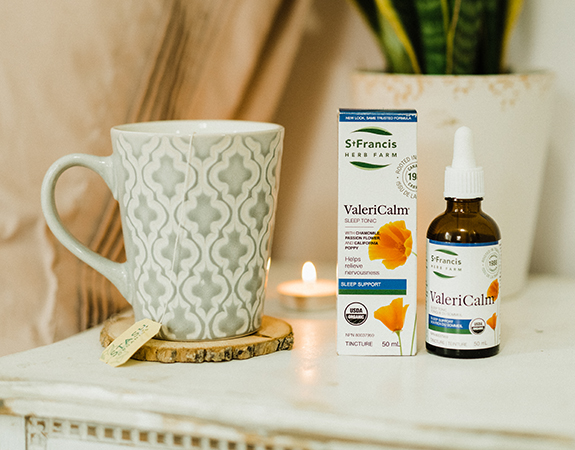 The unique, natural, calming effects from each traditional herb in ValeriCalm complement each other for a holistic sleep-supportive tonic that addresses many factors that often compromise quality sleep in today’s world.

Valerian takes centre stage for its natural sleep promoting effects, but it’s the synergy of the herbal formula that effectively supports the body and mind to calm and relax, preparing the way to sweet dreams and gentle sleep. ValeriCalm features:

Tension and stress affect us all, but they don’t have to impact your sleep! Use our  ValeriCalm tincture before bed if you need an all-natural calming, sedative formula to help calm and relax you and ease you into a peaceful, restorative sleep. 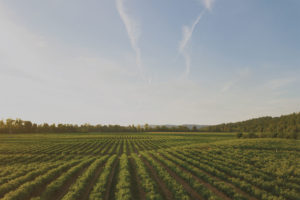 The farm is where we work and where we live, it is our way of life. 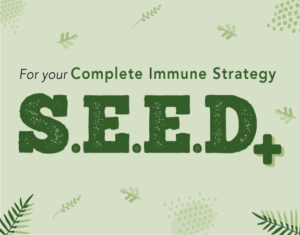 For your Complete Immune Strategy S.E.E.D+

How you can get out in front of this! Many of us are looking for ways to boost health and build a resilient immune system

As September approaches, many families usually look forward to the excitement and change in routine of starting school – but things are a little different